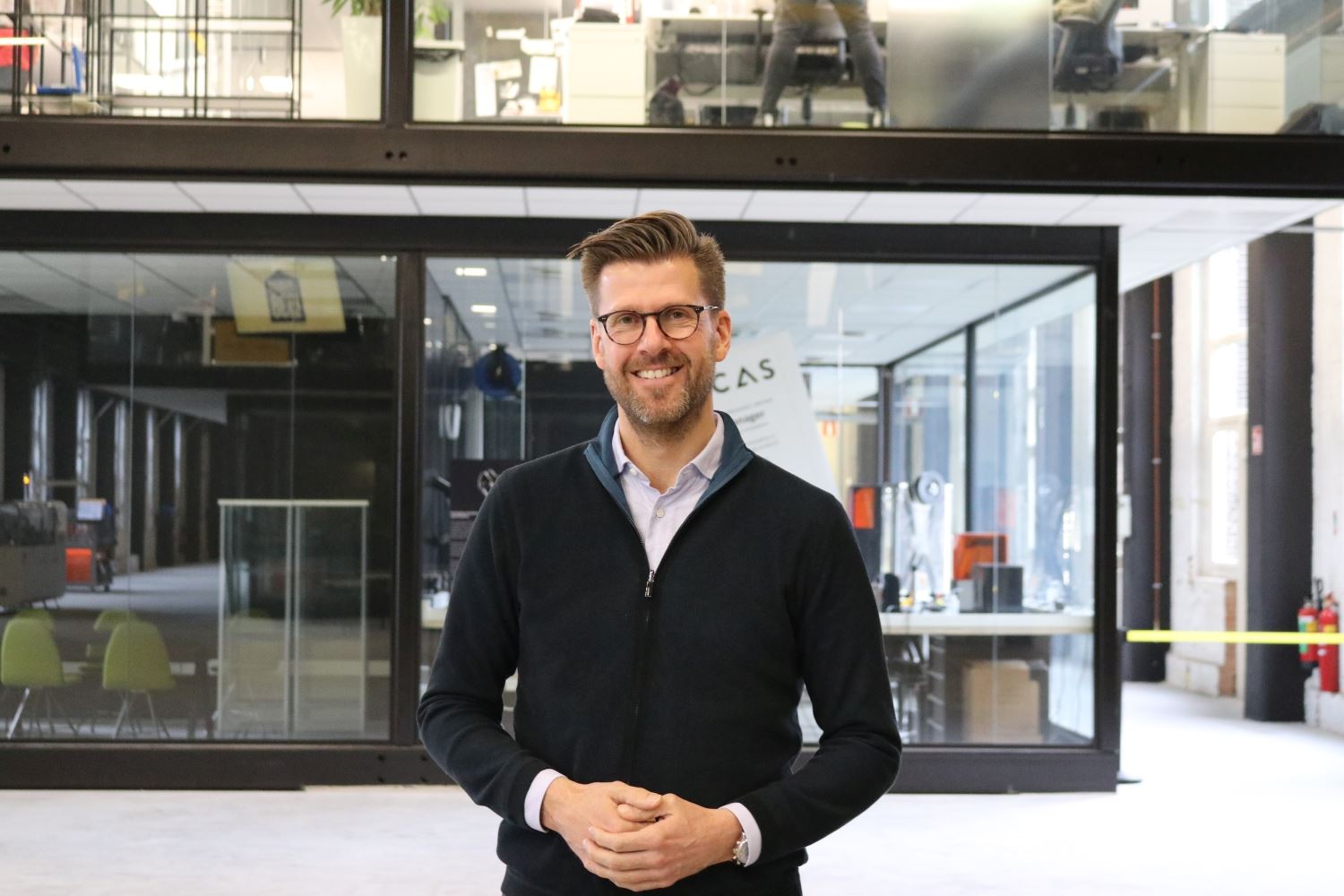 Perron038 opened its doors at the beginning of September last year and the first innovation projects have started. The official opening of the innovation centre for the manufacturing industry in Zwolle will take place in the spring of 2020, the exact date is not known yet. But the plans are ambitious. In addition to the four founding partners more companies have already come on board and six common themes have been identified.

Tembo Group from Kampen had the ambition to establish an open innovation centre. Not alone, but jointly with other companies facing the same challenges in the area of digitization. A building was found and quartermaster, Marius Woldberg, was appointed. ‘We, the four founding partners, Tembo Group from Kampen, Tolsma Grisnich from Emmeloord, AWL Techniek from Harderwijk and investment company Wadinko from Zwolle, set up a foundation: Stichting Perron038,’ says Woldberg.

The hall where it is all going to happen is in an old 1930s industrial building, right beside the railway tracks next to Zwolle Station. An old NS workplace, where Stork and after that, Wärtsilä were also housed. The old overhead crane still hangs there, but a new floor has been laid, robots must be able to drive around, and the entire electro-technical installation has been renewed.

‘The initial idea from Tembo and secondly from AWL Techniek, followed by Wadinko and Tolsma, is that it is no longer feasible to innovate alone. Companies face so many challenges, and there are so many different technologies that they need to delve into. On their own, they can tackle at best one or two themes at a time. But collectively, it is possible to do much more,’ explains Woldberg.

There are two pillars that are important for the foundation. The first is innovation, that is the basis. But you cannot innovate without talent. So, talent development is the second pillar. ‘And we describe talent as the employees of the companies themselves, who are confronted with the new technology and new possibilities. And new, young talent that is still at school or still has to make a choice for technology.’

It is very difficult to receive young people every day at all the factory premises where these companies operate. ‘What if we create a place, where we make technology very visible? Where we receive all sorts of people. With plenty of opportunity to organise events and activities.’ The goal is to make it easy for people

to come and have a look, not just at a showroom but at a place where real work is done with technology. Where companies run part of their R&D agenda. ‘Students work together with employees at a location that is close to the city, next to the railway tracks and near knowledge institutions,’ says Woldberg.

The innovation centre works with Hogeschool Windesheim, Deltion College, Cibab and the Fraunhofer Project Centre of the University of Twente. Perron038 (Zwolle’s network number) doesn’t necessarily focus solely on the Zwolle region, but most of the interested companies are located within a 100 km radius of the province’s capital.

In principle, all mechanical engineering related companies are welcome to participate. ‘We ask companies two things. Firstly, to move a part of their R&D agenda here. They will have workshops and project spaces at their disposal. We also ask them to invest by participating in our collective agenda,’ says Woldberg.

Together with the R&D managers of the already participating companies, a number of common themes have been identified: robotics, vision application, sensoring, configure to order, automated design, and additive manufacturing. ‘Because we do not want everyone to stay in his own corner, we want collective projects.’ 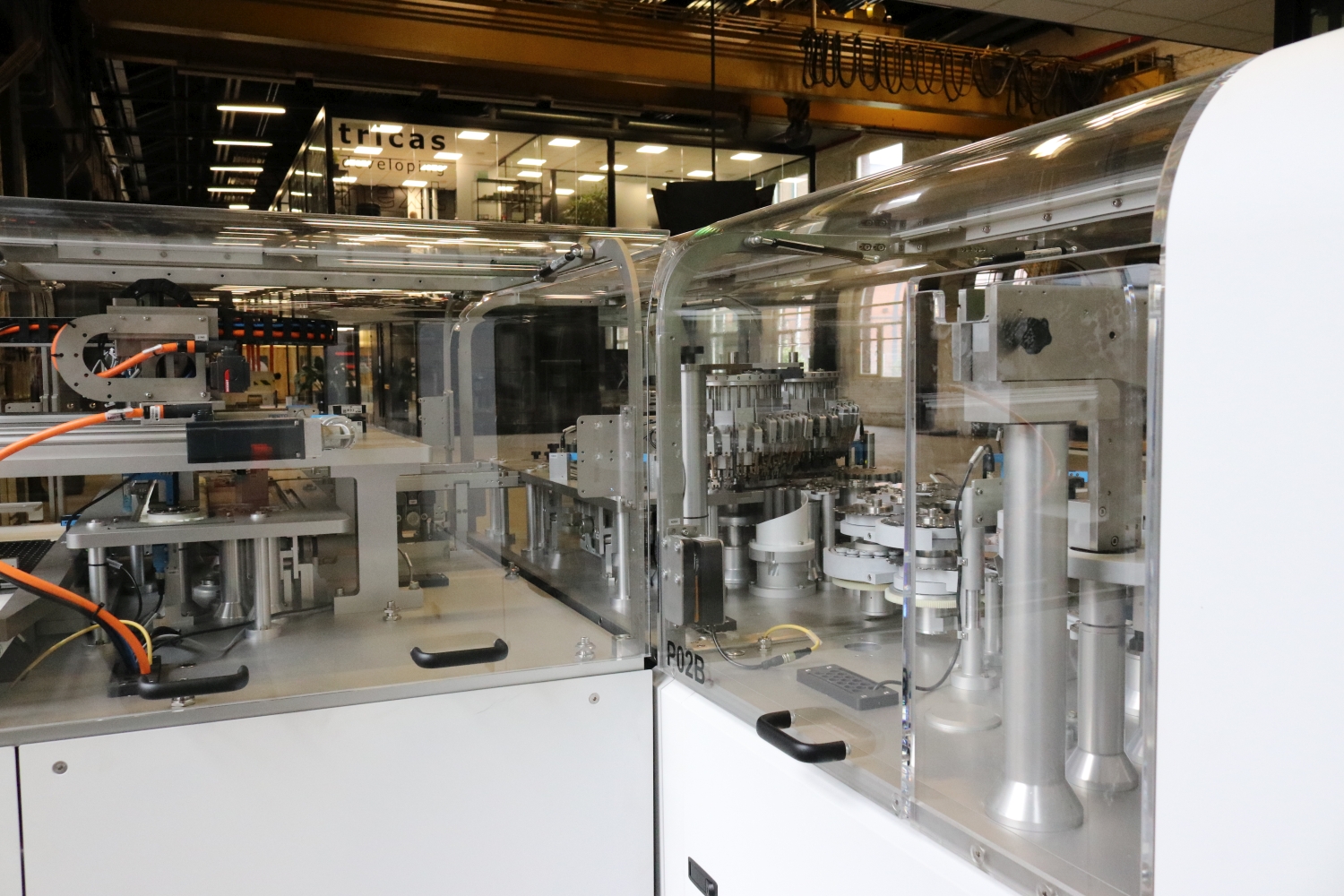 For initiatives like Perron038 to work it is essential to share knowledge with each other. ‘We sat around the table with all the R&D managers and before long the mindset was, we will not be able to work together if we keep our cards close to our chests. We found a way of working together at technological level.’ One company, for example, applies vision technology completely differently than another company. But they both face the challenge of how to deploy vision technology in their own business. Smarter, more efficient, more sustainable, in order to build higher quality machines. ‘When it comes to innovation, we focus not so much on product level, but more on technology level.’

For the innovation agenda, Marius Woldberg meets every month with the R&D managers of the cooperating companies and organisations. ‘For example, last summer we spent a lot of time developing a partnership in the area of vision. That resulted in PRISMA.’

PRISMA stands for Prototyping, Researching and Innovating vision technology for Smart Manufacturing Applications. It is a collaboration between IMS, AWL, Tembo, Tolsma, Fraunhofer Project Centre and Hogeschool Windesheim. 1.2 million euro has been invested by the participants in the form of hours and technology, and almost 900,000 euro in the form of a European subsidy from the European Regional Development Fund (ERDF).

‘From 1 October 2019 to 1 October 2021, work has and will continue to be done on vision technology,’ says Woldberg. ‘Soon there will be four examples of camera applications in the workplace around which we organise events and seminars.’ The four participating companies actually all face a similar challenge, but in a different form. ‘IMS is keen to develop technology for the correct, real-time measurement of the quality of lens modules that is accurate up to the micrometre.

At AWL they want an inline vision application for quality control of the welded components, so that the customer can see in real-time that each product is processed correctly. A question that arises is how the customer can gain access to all production data.

Tembo wants an application for hi-speed production environments. Tolsma focuses on potato processing machines. Now, a hands-on-the production-line, visual inspection still takes place. Ultimately, that should be replaced by technology.’ For the project, researchers from Fraunhofer Project Centre will first look at what is already available in the field of camera technology based on the cases.

Subsequently, work will be carried out on test set-ups that are given a place in the workplace of Perron038.

A second theme is also being developed: additive manufacturing. ‘We are now working with Windesheim, Fraunhofer and various companies to turn this into a project. What is the impact of 3D metal printing technology on production companies? What does that mean for my design process and for material choices?’

A large 3D metal printer from Windesheim will be installed on the shop floor, a 12-metre long EOS M400 that can print aluminium. Perron038 will also organise all kinds of projects around that printer. ‘The printer is linked region-wide to four other printers. So that as a participating company in this project, you can also learn what it is like to print with, for example, titanium.’

The great thing about this method is that there is always a different company in charge of a collaboration project. The forerunner. The other companies join in. For another theme, another company will lead the way. ‘One company cannot develop projects for everything, but can join in on multiple projects,’ he explains. He highlights that Perron038 is in its early years. Sometimes something will not work out, and sometimes it will. ‘That is what we want to achieve. Organic growth. With new partners who bring new energy, perhaps even new themes. We consciously look for that,’ he concludes.